My heart stopped and my stomach dropped when I saw the following words posted in a vegan beauty group on Facebook:

My friend says Illamasqua have started selling in China. Is it true?

Well, obviously, if this was true, then that would mean the brand is no longer cruelty free, right? Hong Kong is not affected by the laws, but to sell cosmetic products elsewhere in China comes with the lawful obligation to test on animals. At least, this is what I’ve always gone by… 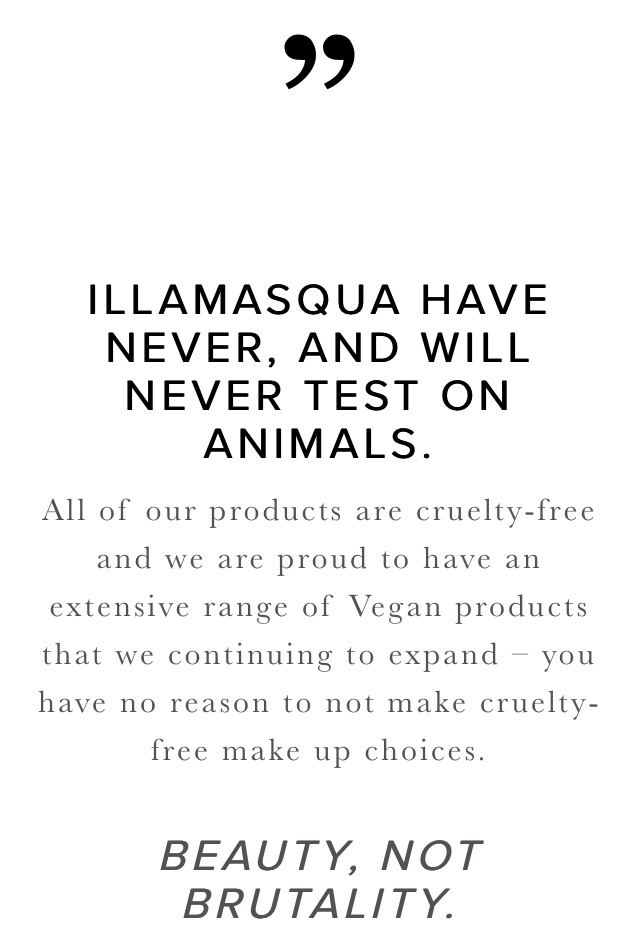 I immediately took to twitter and tweeted the company asking whether the claims were true and warning them that such rumours were circling the vegan world. Left to fester, this sort of thing can really harm a brand. Well, I got no response. I tried again a few days later… no response. I started to get suspicious.

I know there has been some reshuffling high up in the brand because the stand alone stores have been closed down – including the beloved Leeds branch in the arcades. Things were starting to add up, in a scary way…

Then, law student Caitlin Harrod sent me a message on Instagram with the following screenshot from the Illamasqua website:

I posted the screenshot to twitter, again tagging Illamasqua and asking for their clarification. Finally, they answered – I suspect since a lot of my followers were joining in the conversation – and my mind has been put to rest.

For the long and short of it, YES Illamasqua has started selling in China, but NO they have not started testing on animals.

Huh! How can this be? It goes against one of the most basic telltales us vegans and cruelty conscious folk use when shopping for cosmetics! Well, as it turns out, it’s not quite as simple as that. As kindly explained by Rhianna on twitter…

Products to be sold in-store in China must be animal tested. However, brands are able to make their products available in China through the “cross border ecommerce structure”, which is basically a fancy way of saying… online. Brands can sell their products online “in China” and no animal testing is legally required. This is what Illamasqua has started to do. Apparently many cruelty-free brands do this… it’s the first I’d heard of it!

Now, myself especially, we can all breathe a huge sigh of relief.